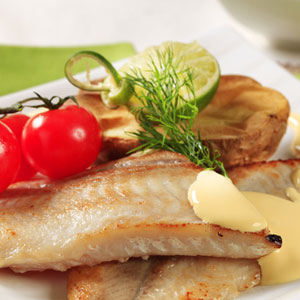 Cooking Tips
A mild-tasting fish used in a huge variety of preparations; suitable for anything from “fish ‘n’ chips” stands to white tablecloth restaurants. With its delicate flavor, cod can be served with flavorful sauces. Try baking, frying, poaching or broiling — but don’t barbeque cod. Its flaky texture will fall apart easily.

Use Atlantic and Pacific cod interchangeably, though Pacific cod produces larger, thicker filets, and its moisture content makes breading difficult. Because it is so lean, cod cooks quickly and benefits from moist heat. The neutral flavor makes an excellent showcase for herbal accents like tarragon, dill and cilantro. Cod tongues and cheeks are delicious treat if you can find them, especially sautéed.

General Information
Cod, considered the default setting for which all other fish species vary, belongs to the add Gadidae family, also comprising haddock, pollock, hake and hoki. Cod sports a distinctive barbel beneath its chin; at it's other end is a broom shaped tail. Atlantic cod is harvested with bottom trawls, gill nets, long lines and hook in line on both sides of the North Atlantic. Market sizes to and 2 1/2 to 10 pounds. Large cod weigh 10 to 25 pounds; jumbos are 25 and over. The term scrod generally refers to cod under 2 1/2 pounds. Atlantic cod's smaller, paler counterpart, Pacific cod, averages 5 to 10 pounds. It is taken by trawls, long lines and pots. The Bering and Barents seas and Gulf of Alaska are major fishing grounds. The two cod species are often not separately distinguished in the marketplace but offered simply as "cod". The fish is found in various forms around the globe. Salted cod is widely used throughout the Mediterranean, Caribbean and Africa. Canada and Norway are major producers of salt cod. Norway has also had success in commercially farming cod.

Atlantic cod fillets have a silvery, subcutaneous layer that distinguishes them from Pacific cod. The lean meat has a mild, clean flavor and large tender flakes. It's less firm than haddock and sweeter than Pacific cod. Raw Atlantic cod is translucent, ranging from white to pinkish. Cooked, it's an opaque white.

Raw Pacific cod is opaque, creamy white. Cooked meat is white, tender firm, lean and flaky, with a mild taste. Moisture content is little higher than that of the Atlantic cod, making it less firm.